"The said Canarians could not live": Return to the Pact of Calatayud

A fragment of folio 1v. of the RGS-1515-01-32 manuscript containing a copy of the so-called Letter of Calatayud (source: Archivo General de Simancas)

This 30th of May, “Day of the Canaries”, we celebrate the fact that Canarians did indeed live and thrive without trading with Castile. They live and will live.

In a single sentence from the so-called Pact or Letter of Calatayud, signed by the Catholic Monarchs and an anonymous guanarteme –Grandcanarian chieftain– the 30th of May 1481, the downfall of autarchy and dismantling of the polities that sustained the life and society of the ancient Canarians is laid bare.

This short article will examine the effects of the pact on Canarian identity through a subjective analysis of relevant documents and in relation to the theme and ethos of the above quoted sentence. To contextualize this extract, we should consider certain misconceptions regarding the pact, such as the belief that this pact gave origin to the Day of the Canaries, or “Día de Canarias”. 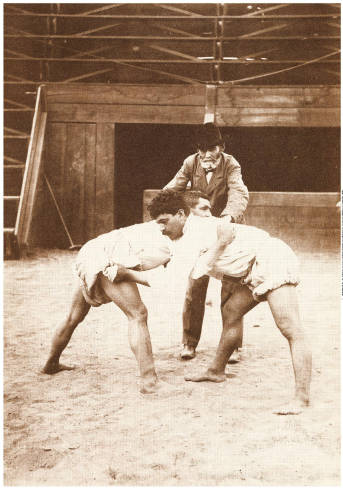 An agarrada between two Canarian wrestlers at the old Circo Cuyás (Las Palmas, Gran Canaria) in the beginning of the 20th century. Canarian wrestling is one of the autochtonous sports probably linked to precolonial origins (source: Memoria Digital de Canarias).

Parties, music, and colours take centre stage on the streets on the 30th of May, also known as the Day of the Canaries. This festivity, celebrated on all of the islands of the archipelago, commemorates the anniversary of the first session of the Canarian parliament in Santa Cruz de Tenerife in 1983. In the past it has been claimed the pact of Calatayud was the event celebrated by this holiday. Interpreting this supposed agreement as the victory of the Iberian reigns triggering the integration of the isles silences and dismisses centuries of canarian resistance to the colonial ambitions of major European powers and finally against Castile.

Besides what was apparently agreed in Calatayud was only applicable to a part of Grandcanarian indigenes, given that part of their island remained resisting at the time of the signing of the letter, two whole islands —La Palma and Tenerife— kept resisting conquest attempts, and another four —Lanzarote, Fuerteventura, El Hierro y La Gomera— belonged to a Castilian estate, reflecting how the hegemonic narrative behind this document crafts an incorrect conceptual framework of Canarian submission following the pact.

But we can appreciate a continuity in Canarian resistance following the pact in cases like the Gomeran revolt of 1488. However, it is after Colombus’ second voyage to America, when “the Canaries had already changed with its submission and dislocation of all indigenous values”[1]MORALES PADRÓN (1978), p. 37., that the geostrategic position of the islands played a key role in counterinsurgency policies, demonstrating a history that directly contradicts what is said in, and about the Pact of Calatayud. The maintenance of indigenous settlements, the uprising of Agüimes to avoid the exploitation of land in 1718-1719[2]BÉTHENCOURT MASSIEU (2001). and those of Tejeda and Artenara among other locations in 1817 and 1819[3]SUÁREZ GRIMÓN (1988). tell a story in which this and other pacts, and especially when violated by Castilians, “motivated feelings of distrust and revolt that were a prolonged cause for indigenous resistance”[4]MORALES PADRÓN (1978), p. 63..

Even though there are a plethora of examples of Canarian resistance against European colonisers, especially when they did not maintain what was promised, we cannot pretend to analise the effects of the pact, particularly regarding its effects on the evolution of modern Canarian identity, without analysing what happened before. This allows us to understand its relevance in the “voluntary” process of detaching from indigenous identities to aid in the accumulation of social capital, giving way to a context that allows for policies that neoliberalised the economy and that “understand natural beings as commodities destined to satisfy the demands of production, reproduction and accumulation of capital”[5]ARISPE et al. (2007), p. 8.. We can thus appreciate a relation between the transition of modern Canarian identity and the institutionalisation of colonialism and capitalism.

To analyse said relation, it is common to focus on the period 1404-1481 in Gran Canaria. Furthermore, analysing that this extract can tell us about the processes of acculturation and evangelisation and their own commercial activities of islanders prior to the Pact of Calatayud entails a contextualisation of not only the past, but also present and futures. This nonlinear understanding of time in the Canary Islands allows to bring to light “negated and silenced pasts” within the canon of history and Western aesthetic, bringing into the present and futures other pasts connected to our times “of which the modern colonial order denies us access to”[6]VÁZQUEZ et al. (2016), p. 82.. Let us consequently return to the celebrations of the Day of the Canaries.

The 30th of May celebrates what the second Spanish republic allowed to constitute from 1931 onwards, an autonomous community in the Canaries, but that could not take place until 1983 due to Franco’s coup d’etat. Nevertheless, the Pact of Calatayud, signed on that very same day five hundred years before but only out of coincidence, reminds us that even though the 30th of May celebrates autonomy, for Canarians, a colonised peoples, “independence never came”[7]PÉREZ FLORES (2018), p. 5. But not because of a dependency to the kingdoms of Castile and Leon to trade or other myths surrounding the Pact of Calatayud. The histories of Canarian people, including those of commerce, precede not just the current Kingdom of Spain, but also the Crown of Castille itself, the Umayyad Caliphate, the Kingdom of Portugal, Visigoth Hispania, and further names given to the various forms of polity that have taken place in the territories of the Iberian Peninsula. Primary sources demonstrate not only how the original population of the archipelago had successfully survived autonomously for centuries, but also how they had communicated and traded with exterior peoples and foreigners, besides having resisted successive attempts of invasion, as well as pirate incursions and slaveholders.

Acculturation and deculturation; “the said Canarians could not live”

There is a plethora of proof that counterargues the presumed trading incapacity of indigenous Canarians, such as the “testimonies of andalucian merchants that commerced in different islands, including Gran Canaria and the other islands not yet under submission”[8]ONRUBIA PINTADO (2002), p. 2, for example. Also, first French-Norman and Castilian conquerors used to trade with some ancient Canarians who “brought them lots of figs and Dragon-tree blood to trade for fishing hooks and old iron tools and sewing needles; and they got Dragon-tree blood worth of 200 doblas and all they gave to them costed not even two francs”[9]SERRA et al. (1964), p.72.. We can thus infer a far developed process of identity mutation as the product of the processes of acculturation and deculturation, already quite developed in the midst of the conquest of Gran Canaria. 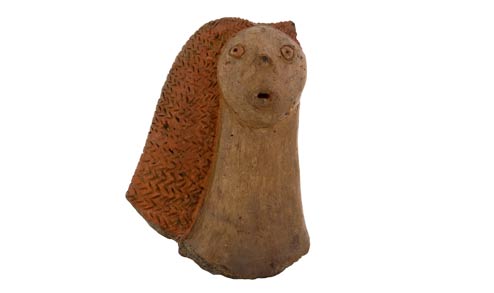 An idol of antropomorphic shape found in the municipalities of either Guía or Gáldar (source: El Museo Canario, registry 2902, Gran Canaria Archaeology Collection).

Professor Jorge Onrubia Pintado describes a society as acculturated “when, at the price of considerable adaptations and reelaborations, the maintenance of the ancient social order, traditions and values is still possible”, and deculturation as “the point in which the brutal destruction of economic foundations of that society brings with it the disaggregation of social groups and the extenuation of cultural traditions”. The utility of these concepts in busting the myths surrounding the Pact of Calatayud is that, as the historical transition of Gran Canaria in between the fourteenth century and first years of the sixteenth century reflects, a primitive acculturation is “followed by an authentic deculturation caused by the conquest and resettlement of the island”, although “it is difficult to not see the extent in which they both integrate in the same colonial dynamic deliberately oriented to bring forth and destroy the mental and material foundations of the aboriginal social space”[10]ONRUBIA PINTADO (2003), pp. 46-47. This would explain how the Canarians that had surrendered “could not live without trading with Castille”, having done so for centuries before being colonised by that kingdom.

The pertinence of what an analysis of the Letter of Calatayud can tell us about Canarian identity can be manifested through the concept of coloniality. Under a subjective decolonial, Marxist analisis of an objective source, the statement we question suggests why the Canary Islands has the lowest GDP per capita in Spain today, centuries later. Modernity, or coloniality, is a term coined by Aníbal Quijano and later developed by Walter Mignolo, amongst many other academics, that explain the continuities of colonialism as the basis of what we call modernity[11]QUIJANO (2007); MIGNOLO (2011).. In the absence of former colonialism, coloniality allows us to reflect on its effects today. Therefore, we can trace a clear relation between Canarian identity today and the processes of primitive accumulation, suggesting structural pressures limiting Canarian individual agency. During the process of acculturation, we can appreciate in the Canaries a model of creolisation prior to the one that took place in the Antilles, Caribbean, and rest of the Americas[12]PÉREZ FLORES, 2018, p. 4., which added to diasporas and migration, explains similarities in Hispano-American and Canarian identity formations. The imposition of a gender binary, racializing and gendering beings, and the degradation of life for capital, are some of the subjectivities shared through coloniality by the territories hugging the Atlantic. 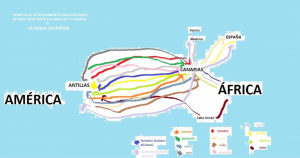 Because the Pact of Calatayud reveals that said “could not live” without dependence to the Crown of Castile is a product of the process of acculturation, said statement must be contextualised, understanding the period and context previous to it to avoid naturalising it and taking it as a fact. This is a period that “represents the phase of the most intense dynamic of acculturation beginning in the second third of the fourteenth century”. The complete deculturation of the indigenous social order, followed by a demographic shift through slavery and (in)voluntary migrations, amongst other processes, ended with the “annihilation of forms of public expression in the autoctonous mythic-ritual universe”[13]ONRUBIA PINTADO (2002), p. 2047.

Based on what has been discussed so far, we can infer a feeling of survival to capitalism and empire (and later nation-state) imposed on the islands as possible motivation for such drastic social change, giving place to a profound spatio-temporal reconfiguration. On that note, I shall end with the questions of what further relations can we bring forth from the processes of acculturation and deculturation in the Canary islands and the imposition of practices and subjectivities centred in the plundering of communal goods and the depredation of nature, including land, animals, humans, in other words, life.

Definitely, every 30th of May brings an occasion to question the subjectivities inherited from the Pact of Calatayud, especially statements that are historically easily refutable like “the so-called Canarians are concerned they couldn’t survive without coming to our reigns of Castile and Leon to trade” is.