[…] they made lines either on planks, walls or stones; called them “tara”, and “tarja” the memory of what they meant.

Welcome to PROYECTO TARHA, a nonprofit initiative devoted to the research and international popularization of the Ancient History of the Canary Islands through the study of documentary sources.

To achieve its objectives, PROYECTO TARHA is provided with the following resources and actions:

PROYECTO TARHA is unrelated to any institution, company, group or scientific organization, either academic, economic, political or religious, either public or private, beyond whatever is strictly necessary for the fulfillment of its research and educational purposes.

PROYECTO TARHA is born with the commitment to treat topics rigorously, always making a clear distinction among objective data and hypotheses. 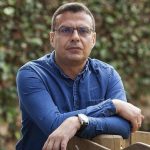 Received an undergraduate degree in Telecommunication Engineering (Specialty in Electronic Equipment) at Universidad de Las Palmas de Gran Canaria (ULPGC) and a BSc. degree in Telecommunication Systems Engineering at Universidad Europea – Madrid. As an engineer he successively worked for two widely-known telecom corporations between 1999-2002 and in 2004 he joined the Spanish Research Council (CSIC) where he is currently working as an IT unit responsible. In 2016 he founded the PROYECTO TARHA initiative, developed the multidisciplinary database accompanying this project and published his first historiographical essay as well: The indigenous pacts of Gran Canaria and Tenerife : A chronological and contextual revision (LeCanarien ediciones). In 2021 libraries saw his second work: the first critical edition of the unpublished manuscript Conquest of the Seven Ysles of Canaria (1687) by Dr. Tomás Marín de Cubas (1643-1704), with LeCanarien ediciones also.

Received a BSc. degree in History and International Relationships at the School of Oriental and African Studies (SOAS) – University of London. At present (2002) she is attending a MSc. degree program in Human Rights and Politics at The London School of Economics and Political Science (LSE).