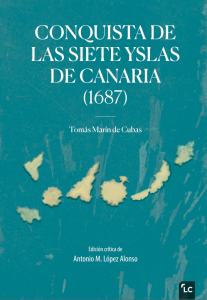 PLEASE FIND BELOW SOME LINKS TO MEDIA INTERVIEWS ON THIS BOOK.

EXPLANATORY NOTE: Due to some incoming enquiries, we must stress as indicated in this post that ours is not a reissue of the 1694 copy-manuscript by Marín de Cubas, but the first edition of his 1687 unpublished manuscript.

We are very pleased to announce the publication in LeCanarien Ediciones of our second printed work; the first and long-awaited edition of one of the fundamental works for the knowledge of the ancient history of our Archipelago: CONQUEST OF THE SEVEN YSLES OF CANARIA by Canarian physician and historian Tomás Marín de Cubas.

Unpublished since its composition in 1687 by Dr. Tomás Marín de Cubas (1643-1704) as a draft or first version of his famous History of the Seven Ysles of Canaria (1694) CONQUEST OF THE SEVEN YSLES OF CANARIA not only complements and enriches its successor according to the noticeable differences in treatment and content that separate both works: unlike the various editions published up to now of the final version –of which only a posthumous copy dated from the 18th century remains– this first edition in printed format of the preliminary text benefits from the authenticity that coming from a manuscript truly and entirely written in the handwriting of the doctor and historian born in Telde –Gran Canaria– gives it. 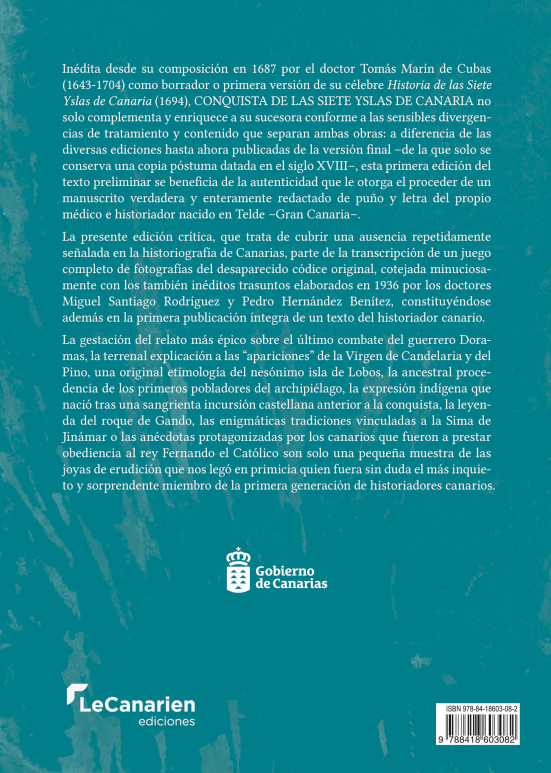 This critical edition (in Spanish) which intends to cover an absence repeatedly noted by Canary Islands’ historiographers has been prepared starting from a transcription out of a full set of photographs of the missing original codex, compared meticulously with the also unpublished copies made in 1936 by doctors Miguel Santiago Rodríguez (1905-1972) and Pedro Hernández Benítez (1893-1968), so also constituting the first publication of a whole text authored by the Canarian historian.

The born of the most epic account on the last fight of warrior Doramas, the earthly explanation of the “apparitions” of the Virgins of Candelaria and of the Pine, an original ethymology of the nesonym Isla de Lobos, the ancient origin of the Archipelago’s first dwellers, the indigenous expression born in Gran Canaria following a bloody Castilian attack before the European conquest of the Islands, the legend of Gando Rock, the enigmatic traditions linked to Jinámar Chasm or the anecdotes starred by the Canarians who went abroad to yield obedience to King Ferdinand the Catholic are just a small sample of the erudition jewels firstly bequeathed to us by undoubtedly the most restless, amazing member of the first generation of Canarian historians.