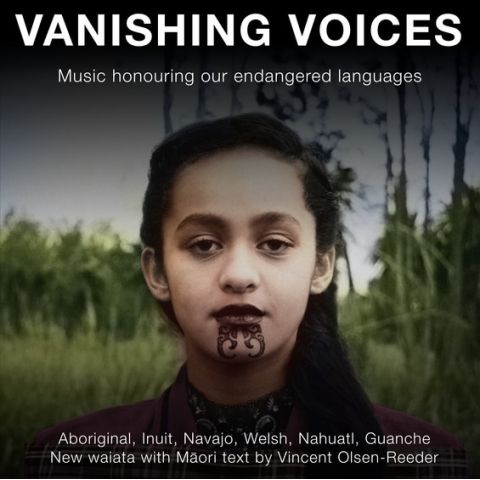 Stone justifies the choice of the ancient Canarian culture in these terms:

One piece to be performed, Aica Maraga, is in Guanche and tells the harrowing story of the invasion of the Canary Islands by Spanish conquerors. The song laments the horrifying deaths of their loved ones at the hands of the invaders and the heart-breaking realisation of those left behind that in order to survive as a people they would have to marry into the invading population. The Guanche language of the Canary Islands no longer exists. 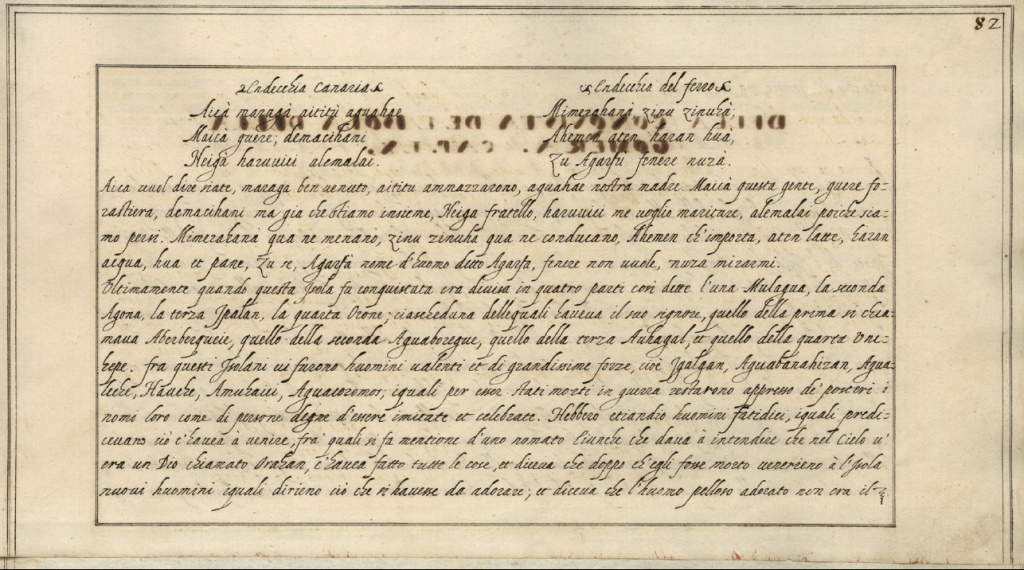 In particular, the piece chosen to represent the Canary Islands, with arrangements by Yónatan Sánchez Santianes, Manager at Conservatorio Superior de Música de Canarias, is precisely one of the few complete indigenous texts of which we have evidence: a dirge from Gran Canaria collected by Engineer Leonardo Torriani in the late sixteenth century:

According to Torriani, its translation is as follows:

Be welcome, they killed our mother

those foreign people, but as we are together,

brother, I want to get married for we are hopeless[1]This translation by PROYECTO TARHA.

In the next video we show an earlier performance of the same piece by the En-Cantadoras choir.

The other valuable contribution of the Cremone engineer was a dirge from El Hierro island:

And its translation, also according to Torriani:

Does it matter? Milk, water, bread

When Agarfá does not want to look at me[2]This translation by PROYECTO TARHA.

Leaving little room for doubt, Leonardo Torriani collected these pieces and their interpretation from the folklore without knowing the ancient indigenous language and, therefore, the adaptation of the phonemes to the Italian language and their transcription to the Latin alphabet are not exempt of distortion. To these difficulties we can add that we ignore whether these works were composed either in pre-colonial or colonial times and, if this latter case, whether they were either an active or passive subject of the transculturation process; for instance, whether the verses structure and metric belong to the indigenous culture or they rreceived some influence of foreign compositions instead or, on the contrary, being indigenous, they inserted new stylistic patterns into the European late Medieval-Renaissance songbook, as in the case of the dance named Canary.

It is not surprising, therefore, that the translation of these dirges has aroused the interest of many researchers whose conclusions, whether provisional or definitive, range from questioning the authenticity of the verses to the provision of new perspectives on their meaning, including Dr. Juan Bethencourt Alfonso, Professors María Rosa Alonso Rodríguez, Lionel Galand, Dominik Josef Wölfel, Juan Álvarez Delgado and Dr. Lothar Siemens Hernández.

In more or less recent times, studies by Professors Maximiano Trapero, author of a complete synthesis on this topic, and Víctor de Lama de la Cruz stand out, as well as a philological revision of these dirges on the account of Dr. Ignacio Reyes García.

We would like to thank Lola García Nieves for providing us with the link to the video of this piece’s performance by Supertonic choir.