We might find the root of such manipulation on the personal confrontation between the two leaders of the conquest, which begins after the return of Jehan de Béthencourt from his voyage to Seville, undertaken on the pretext of seeking reinforcements and supplies for the campaign, while Gadifer de La Salle remained in the Archipelago assuming simultaneously and alone, the burden of the colony rule, the war on the Canaries and the repression of the riots staged by some of the other adventure members.

Indeed, De la Salle learned how Béthencourt had not only delayed the shipment of the promised refreshments but had also rendered in vassalage the conquered islands –Lanzarote, Fuerteventura and El Hierro– and those yet to be conquered to King Henry III of Castile, receiving as an exclusive right the title of Lord of the Islands of Canaria, created for this purpose for the Norman. And all behind his back.

Following this incident an undeclared war between the two leaders would begin gradually losing its sneaky character and reaching its peak in De la Salle’s resigning to his participation in the campaign after seeing thwarted his attempt to get a fair deal of the royal patronage, with such exotic events as the following and almost puerile exchange of threats: Original miniature from the Egerton 2709 manuscript which shows Jehan IV de Béthencourt and Gadifer de La Salle sitting on the stern of the ship that would take them to the Canary Islands (source: The British Library).

Codex Egerton 2709, preserved in The British Library, and known as Text G following the notation by Professors Elías Serra Ràfols and Alejandro Cioranescu who ascribed its authorship to Gadifer de La Salle, [1]SERRA (1959), pp. 230, 243 -244. it is the shortest and sober of the two existing manuscripts, lacking any outstanding illustration except one sole miniature on the cover depicting the ship chartered by De la Salle to carry the first troops of the Conquest, and showing curious and significant details that reveal the bitterness of that confrontation, as the figures of the two leaders sitting on the stern, being the Pictavin certainly identified thanks to the coat of arms on the shield he holds with his left hand while Béthencourt’s is hidden behind the first character. De la Salle’s blazon also appears on the pennants fluttering in the wind, while that of Béthencourt is only to be suspected behind two manifestly intentional smudges on the stern flag.[2]See footnote in SERRA (1959), p. 232. 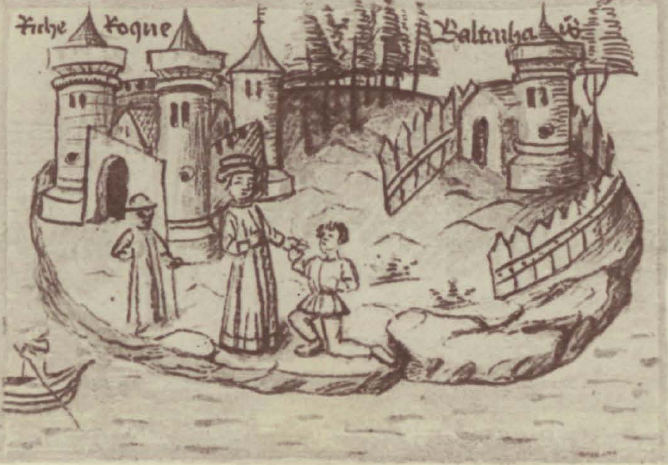 Codex Mont-Ruffet, kept in the French city of Rouen, at the Bibliothèque patrimoniale Jacques Villon, catalogue number Ms mm 129 (CGM 1399),[3]Data provided to us by Heritage Assistant Lucie Garcia by personal communication on April 21th 2016. was the first discovered and published version of Le Canarien,  being known as Text B, its authorship ascribed to Jehan V de Béthencourt, nephew of the Norman conqueror. This version is believed to be a partial copy of the Text G, extended and modified in order to glorify the figure of the Baron in detriment of its partner, Gadifer de La Salle. [4]SERRA (1959), pp 255-256. Its main features are:

Although the illustration prepared by Engraver Balthasar Moncornet for the Pierre Bergeron’s edition of Le Canarien’s Text B (1630) claims to be the true portrait of Messire Jhean de Béthencourt, King of the Canaries, it is very likely to be an idealized image of the Norman Baron (source: Museo de Historia y Antropología de Tenerife – Lercaro House).

Apart from the various classic editions published of this chronicle, of which we can find a complete listing and outlines in an article by Professor José Barrios García titled On the lines of textual transmission of Le Canarien: manuscripts, copies and editions, we recommend that classical critical edition titled Le Canarien: French chronicles on the Conquest of the Canaries, by Professors Elías Serra Ràfols (Mahón, Menorca, 1898 – La Laguna, Tenerife, 1973) and Alejandro Cioranescu (Moroeni, Romania, 1911 – Santa Cruz de Tenerife, 1999), published in three volumes by the Instituto de Estudios Canarios, the Spanish Council for Scientific Research and El Museo Canario between 1959 and 1964.

Nevertheless, more recent editions do exist, as Le Canarien. A Portrait of Two Worlds, in two volumes –Texts and Contexts– by Professor Eduardo Aznar Vallejo, accompanied by a number of interesting studies signed by experts in different disciplines -Archaeology, Biology, Philology, History of Art, among others–.

In any case, it is always a pleasure to enjoy the controversial confrontation between the two versions of this classic, featuring a reading as agile as enjoyable and intense.

And, incidentally, may this be food for thought on how in other coordinates, with stories of much less entity, major films have been produced.