A tower, a church and a catechism. The Sword, the Cross and the Word. Raised on two low hills but owning and watching the most valuable of spoils: the water that lies within a number of wells on the southwestern coast of Lanzarote. Close over the sea, the horizon of the next conquest: the islet of Lobos and, right behind, the island of Fuerteventura.

After seizing Lanzarote sponsored by the Crown of Castile, Norman Baron Jehan IV de Béthencourt and his partner, French Knight Gadifer de La Salle, founded here the first colonial city recognized as such by Christianity of the so-called Old Continent. Indeed, from the French city of Marseille, by papal bull dated 7th July 1404, Pope Benedict XIII decreed the establishment of the Bishopric of Rubicon. Hence the church of San Marcial erected into a cathedral, and the small fortified camp of the Castilian and Norman-French conquerors became a city.

But the importance of this place is not due only to the most remarkable milestone of the establishment of the first European colony of the Modern Era in the Atlantic, but also and above all it stands as the scene of the implementation of warfaring, logistics, evangelization and deculturation techniques performed upon a society anthropologically strange to that of Europe. Such techniques kept on being tested for the rest of the conquest of the Canaries over almost a century and whose systematization found a larger-scale application, nearly nine decades later, during the conquest of America.

Given these facts, it is easy to understand the enormous archaeological and historical value of this site. And yet, in despite of having been declared an Asset of Cultural Interest with the category of Archaeological Zone in 2003 it is regrettable to realize the lack of publicising this heritage treasure is undergoing.

Let us begin with the access indications from the nearest town: Playa Blanca. They are limited to some cryptic-meaning signs –S. M. del Rubicón–, at least for anyone who does not know the ancient history of the Archipelago, abounding the signs that refer to the Torre del Águila, the Papagayo beaches or, as one would expect, to the multiple hotel establishments in the area instead.

Not having used it, we really do not know whether the access path to the beaches that runs parallel to the coast features any additional signposting but, at least, the main access leading to the beaches nearby the Natural Monument of Los Ajaches -a dirt road daily beaten by many motor vehicles, guarded by a gatehouse and barrier where the Yaiza Town Council requests the non-resident visitors a toll 3 euros per vehicle- is completely without any indication of the location of the site, an omission that is maintained throughout the road despite all beaches in the area are well marked.

Placed in Playa Mujeres, west of the site, we take the path climbing in the South-East direction, overlooking not the peculiar color of the rocks that demarcate the beach which we suspect inspired the French name of the castle —rubicond (reddish-blonde), Rubicon–. [1]The term castle here refers to the European establishment as a whole and not just the tower. See TEJERA (1989), p 68. The russet of nearby rocks probably inspired the name of the Norman camp: rubicond (reddish-blonde), Rubicon (source: PROYECTO TARHA).

After going up the path and walking about two hundred meters to the South-East, a descent begins from which the site can be made out, as in the distance it goes quite unnoticed opposite the long fence made of boundary stones used to delimit the site –not showing any evidence about its function and so it diverts the attention of hikers–, as well as the gleaming of the vehicles cluttering the nearby Papagayo beach parking. The only clue to the peculiarity of what we are about to find is given to us by the set of panels on the ravine’s bottom, which precedes some simple, modern-styled low walls surrounding some apparently rectangular areas and whose presence, although somewhat weird in this sun-and-beach context, is not particularly remarkable. The site of San Marcial del Rubicón seen from the main trail access. Boundery stones as well as informational posters altogether with low walls protecting the wells and, on the horizon, the car parking for users of the beaches of Papagayo can be seen. On the right side, Playa del Pozo (Well Beach). On the left side, the path of access to the platform that was once occupied by the cathedral church of San Marcial (fuente: PROYECTO TARHA).

When reaching the wells it can be observed that these have been protected laterally with the above said low stone walls and vertically with iron lattices. The typology of the two main wells is mixed, giving access to the water through a combined method made out of a traditional curbstone with a stepped ramp. 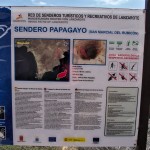 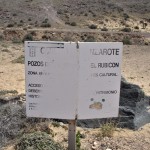 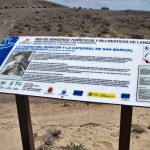 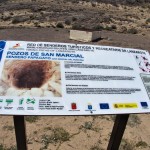 On the nearby platform on the left side of the ravine, at a height lower than the current parking’s, the Cathedral of San Marcial was erected, being probably destroyed several times throughout its useful life due to pirate attacks, until the advocation was transferred to the town of Yaiza, inside the island, the year of 1630, although the bishopric had moved to Gran Canaria after completion of the conquest of the latter. A plaque commemorating the sixth centennial of the Diocese Canariensis-Rubicensis (source: PROYECTO TARHA). The site of the cathedral church of San Marcial. The Tower of Rubicon stood on the point across the ravine. One of the wells can be seen on the right side. (source: PROYECTO TARHA).

As for the wells of Rubicon, folklore claims the existence of at least seven, but only four –San Marcial Well, Cross Well, Pool Well and Goats Well– are known at present,[2]TEJERA (1989), pp 24-42 three of which remain operational: the first two under the control of the Consorcio del Agua de Lanzarote and the fourth, accessible to the public for being smaller and posing no risk. 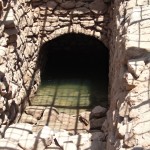 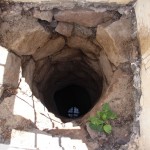 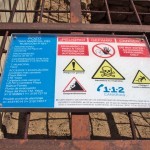 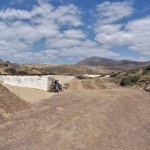 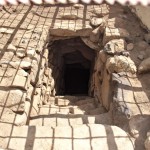 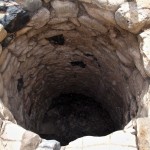 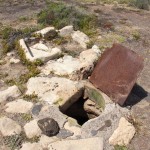 Although the wells’ masonry work seems Norman-French made, [3]Le Canarien chronicle mentions several times the presence on Lanzarote of a mason and foreman, Jehan le Masson –for example, SERRA (1960), p. 322- as the head of a team of masons and carpenters. it is possible that the original excavations were made by the indigenes, and this would explain the aforementioned mixed method of accessing the water, unprecedented in similar European structures.[4]TEJERA (1989), pp . 42-43. Let us add the existence of a number of indigenous engravings over some of the wells constructive units, standing out several podomorphs -being Lanzarote and Fuerteventura plenty of them on the other hand- and an anthropomorphic representation that professors Antonio Tejera Gaspar and Eduardo Aznar Vallejo relate to the Punic goddess Tanit.[5]TEJERA (1989), pp. 43-55. Some of the indigenous engravings inside the Well of the Cross, with a presumed Sign of Tanit (upper right) standing out among them —source: TEJERA (1989), p. 45—.

As a result of the 1960 archaeological excavations by the Serra Ràfols brothers, and those of 1986 and 1988 by the aforementioned professors Antonio Tejera Gaspar and Eduardo Aznar Vallejo, the foundations of the tower and its annexes, as well as the remains of some indigenous houses, the floor of the cathedral church and a necropolis associated with the latter were uncovered,[6]TEJERA (1989), pp. 67-70. then proceeding to a full reburial of the whole set for protection purposes. However, the site is susceptible to new research which we hope to take place as soon as possible in order to properly value these heritage assets. 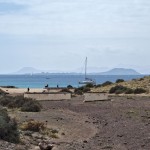 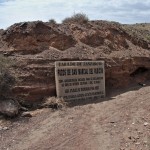 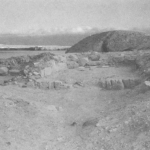