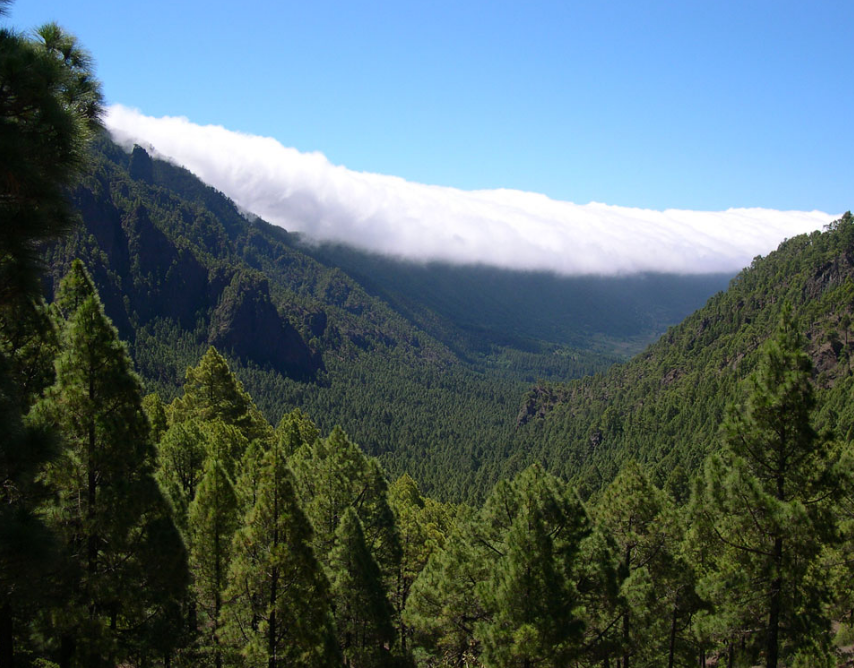 The sea of clouds upon the inner cliffs surrounding Caldera de Taburiente on La Palma island. Benahoare’s last indigenous defenders took shelter on them under Tanausu’s command against Castilian invaders (photo: Government of the Canaries).

WHICH WERE THE LAST WORDS SPOKEN BY TANAUSU, LA PALMA’S LAST INDIGENOUS CHIEFTAIN, BEFORE LETTING HIMSELF DIE WHILST HE WAS BEING TAKEN TO CASTILE AS A PRISONER IN 1493?

Tanausu was the last of La Palma chieftains resisting the conquest campaign led by Castilian Adelantado Alonso Fernández de Lugo in 1493. Being fortified upon the cliffs surrounding the erosive crater known as Caldera de Taburiente –Acero in the indigenous language–, Tanausu and his subjects fell into the invaders’ hands when Fernández de Lugo broke his word of parleying with La Palma-born chieftain to negotiate the terms of an agreed surrender.

A general belief holds that Tanausu exclaimed vacaguare –an indigenous expression frequently translated as I want to die– before starving to death whilst he was deported to Castile as a prisoner on board some vessel but the truth is no documentary proof supports this idea.

Having made this prey he [Alonso Fernández de Lugo] wanted to send some natives he had taken prisoners to the Catholic Monarchs giving them an account of what happened, and one of them among the captivated prisoners was Captain Tanausu, who being captivated and sent to Spain got sick because of his rage and let himself die eating nothing, such a common and ordinary thing among La Palma dwellers to let themselves die.

Where does the idea stating that Tanausu spoke this ominous expression come from? Abreu Galindo himself give us the key a few chapters before, in the fourth:

In their illnesses these people [La Palma indigenes] were so sorrowful. Should anyone felt sick he told his kin: Vacaguare (“I want to die”). Then they would fill a pot with milk and get him into a cave, wherever he wanted to die, and make a bed out of skins where he would lay down; and they would put the ganigo –jar– of milk by the bedhead and close the entrance of the cave where they would let him die.

As it could be read, such an expression refers exclusively to the desire of facing own’s death voluntarily on the occassion of sickness or, more probably, old-ageing ailments. As expected, Abreu Galindo’s interpretation is an ethnocentric one giving up to get deeper into the cultural foundations of the rite limiting himself to give a somewhat shallow justification: the alleged pussilanimity or sorrowfulness of La Palma inhabitants in the face of illness implicitly opposing the prescriptive resignation that Christian Europe contemporary to the text was obliged to face body health lackness with.

What is left now is to determine the moment in which the first fusion of both passages took place as well as the name of its maker. In our opinion, all the evidences point to La Palma-born journalist, writer and teacher Antonio Rodríguez López (1836-1901) being the author of a number of historical fiction tales who inserted the following passage in chapter VII of his brief story Vacaguaré:

Tanausu was taken prisoner so pronouncing the dreadful quotation: Vacaguare! he sealed his lip and brought his eyes down.

This little piece of work as well as its author’s name taken as a pen-name were later adopted by Tenerife-born politician and journalist Secundino Delgado Rodríguez (1867-1912), father of Canarian independence movement, in his autobiography ¡Vacaguaré…! (Vía Crucis) published in Mexico in 1904. Starting from this landmark the link between this ritual formula and Benahoare’s[1]La Palma’s indigenous name following Abreu Galindo and Leonardo Torriani. last warrior would put down roots in the Canaries’ modern folklore.